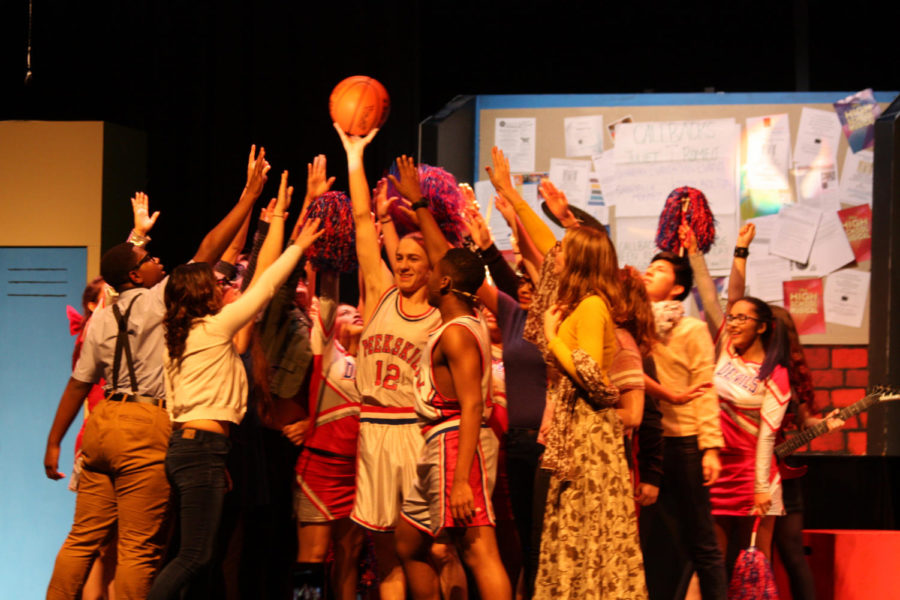 For the first time (perhaps the only time), a musical was put on for our fall Drama Club performance, while this is typically reserved for the spring.  This change was eagerly received!   This fall’s production of Disney’s High School Musical at Peekskill High School drew larger crowds than previous fall shows.  The audience and cast alike seemed charged by the palpable energy in the room, which seemed to spread and grow throughout the performance.

Our school’s director, Mr. Terry Sandler certainly made artistic adaptations, letting his creativity usher the kids into center stage.  Mr. Sandler was proud to announce that he was one of few who actually did not see Disney’s version of High School Musical.  He writes, “because I didn’t see it, I was able to approach the production with a fresh, new take.”  And that’s exactly what he did.  His personalized flavor was tangible.  For instance, one of the early scenes had a reference to our strict cell-phone policy, and this line was met with laughter and a clear sense of familiarity.  The Red Devils were clearly a part of the scene.

In the play, sports and arts were combined beautifully. During “Get’cha Head In The Game,” the Jocks, led by Troy Bolton (Justin Hahn) performed a memorable dance and basketball routine.  Their moves were choreographed to capture athletics as a different form of art.  The audience felt the power of this number, and it was evident.

In addition, the play showed the way worlds combine.  Despite the differences between the cliques, the groups found ways to join one another.  For instance,the brainiac of the school, Taylor McKessie (Kennedy Bordas) grew to fancy one of the star basketball players, Chad Danforth (Gordon Evans).  Everyone was rooting for them as they sang “We’re All in This Together,” while all the seemingly mismatched couples came together, uniting the two worlds.

Lessons were learned.  For instance, Sharpay Evans (Kathryn Czerwinski) begrudgingly agreed to share the wealth when she, for the first time ever, didn’t get the lead in the play.  Instead, Gabriella Montez (Anabel Sanchez), who normally would lead the Science Decathlon was now the lead in the play.

As the drama teacher, Ms.Darbus (August Vitarbo & Ava Cairl) and the basketball coach, Coach Bolton (Francesca Ungaro) came together, we all saw the importance of tossing away the labels and allowing people to be their true selves. At first, both characters were hesitant in allowing the students to break the status quo and try new things, but after seeing a different side of the students, it was undeniable. They deserved to be who they really were, and the stage was just where Troy Bolton and Gabriella Montez belonged.

We definitely were all in this together!  The crew, working diligently throughout practices and performances came out to take a bow along with the actors and actresses. With a gesture of gratitude students acknowledged the advisors, as well as lighting and soundboard operators who brought spirit, professionalism and fabulous work ethic on board.

Undoubtedly, the spirit was contagious.  Audience members left with a spring in their step and a clear sense of energy.  This fall musical started the year off with a bang!  We look forward to seeing continued success and vibrant energy as we set our sights on the spring performance.  At this point, we’re planning to perform Beauty and the Beast.  Everyone is encouraged to come out and join the fun.  Get involved and you’ll definitely catch the spirit.