Poetry Corner: Have a Voice 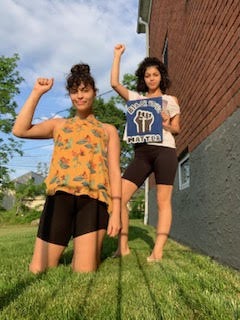 Just be yourself–
Unlike anyone else
You’re meant to stand out.
Show them what you’re about.

You never should worry about your color
That doesn’t make you any less human than another.
We all are born with the same rights,
So why are we still forced to fight?

You know this–they say we’re all free
But because of that cop, George Floyd couldn’t breathe
All it took was that one knee
And now all the world is left to see:
There is no such thing as equality.

We’re always talking about black pride
Yet when we go and walk outside
We wonder if we’re gonna die
All because we’re a different color
We get abused and kicked to the gutter
You’ve no right to treat me different from the others.

All because I’m black crossing the street
George Floyd had his head on hot concrete
Helpless, lying there, crying for his mom
I don’t know how that cop was so calm
Take the wrong turn–won’t see your kids again
Turn the corner and you see those men

Those men who discriminate against all of us
They make everything into such a big fuss
Now we wanna peacefully protest
But your deaf ears are making us stress.
You wanna throw tear gas even though we’re peaceful
With this you’re showing us how nothing is equal

Then we have to get violent
You don’t hear us when we’re silent
Because of you cops we are left dying
Anything we say, you think we’re lying.

8 minutes and 46 seconds
With one man’s knee–the ugliest weapon
Not one but four men, on the ground, George was pinned.
They act as if being colored is a sin.

His pain remains, it’s within us all.
We know we must break down the wall.
They stole his rights, George had no choice.
Now it’s up to us to give him a voice.